Report from the Santa Cruz Sentinel on Chris’s outstanding performance…..

With five minutes left in the heat, Harvey found a wave that walled up sharply near the lower cliffs. He cut into it hard, lifting the vessel about three feet above the lip. Then, he landed it perfectly and kept surfing while whoops and hollers spilled out from the cliff side.

I got a water-level look at it. I saw exactly what he was going to do, said Rusty Sage of Santa Cruz…..also a Gath rider who placed third in the contest final…… I hoped he wouldn’t make it, and he made it. …

That’s why we call him Air Harvey.

Harvey got a perfect score of 30 on that wave, which vaulted him to the top of the standings. 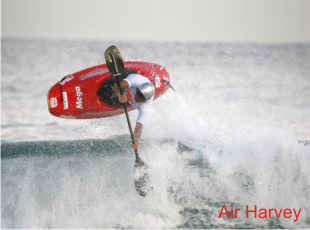